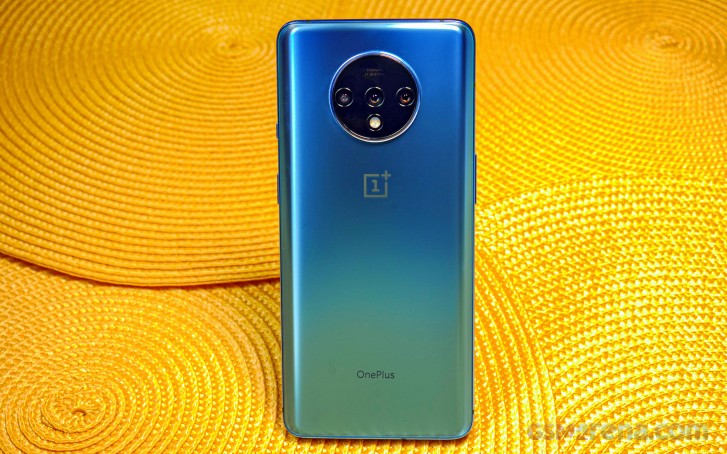 Introduction
With the OnePlus 7 and 7 Pro, it was the first time the brand launched two versions of a flagship where one offered superior features over the other. The OnePlus 7T fills in the gap that was left between the 7 and 7 Pro.
The OnePlus 7T now has the 90Hz 'Fluid AMOLED' display that the industry was raving about. This can now be experienced in a slightly smaller form factor. Not only this, but OnePlus managed to get a taller 20:9 display on the 7T, thus increasing its screen-to-body ratio. The notch is also 31.46% smaller, which helps the latter.
OnePlus 7T specs:
Body: 160.94 x 74.44 x 8.13 mm, 190g, 3D Gorilla Glass frosted back side,
Screen: 6.55" Fluid AMOLED, 2400 x 1080 px, 20:9 aspect ratio; 402ppi
Chipset: Qualcomm Snapdragon 855+; Octa-core (1x2.96 GHz Kryo 485 & 3x2.42 GHz Kryo 485 & 4x1.78 GHz Kryo 485); Adreno 640
Memory: 8GB LPDDR4X RAM, 128GB/256GB UFS 3.0 dual-lane storage
OS: OxygenOS based on Android 10
Rear cameras: Main: Sony IMX586 48MP (f/1.6) 0.8µm pixel size, PDAF, OIS, EIS; Telephoto: 12MP (f/2.2) 1.0µm pixels; Ultra wide: 16MP (f2.2) 117-degree field of view
Front camera: Sony IMX471 16MP, 1.0µm pixel size
Battery: 3,800 mAh battery, Warp Charge 30W
Misc: Alert slider, stereo loudspeakers, NFC, in-display fingerprint scanner, USB-C 3.1 port, available in Frosted Silver and Glacier Blue.
As a result of the taller display, the 7T is slightly longer than the 7 (160.94 vs 157.7mm). It weighs just 8 grams more and there are a couple of internal hardware changes as well. The 7T bumps up to the Snapdragon 855+, which yields a 15% performance boost over the Snapdragon 855 and the base model is now 8GB of RAM instead of 6GB. UFS 3.0 storage is among the fastest you can get on a smartphone and you get 128GB of it on the base model.
Oneplus 7T review
The 7T's camera setup is updated with an ultra-wide camera and a telephoto camera (the OnePlus 7 had neither). While the ultra-wide camera hardware is identical to the one on the OnePlus 7 Pro, the 7T has an updated telephoto camera with higher-resolution and a brighter f/2.2 aperture. However, OIS was omitted this time so we'll be checking to see how it impacts portrait and zoomed photos.
Charging has also been matched to the 7 Pro's. In addition to a 100mAh bump in battery size, the 7T now supports OnePlus' Warp Charge 30W versus the previous-gen 20W.
Unboxing the OnePlus 7T
In recent years, OnePlus has paid a lot of attention to its packaging. Aside from using sturdy cardboard materials, OnePlus made the entire box a distinct red color that pops against any background. The finish on the box also feels premium and soft to the touch. The matte finish also makes the box "glow" in the light.
This new box is a throwback to the way that OnePlus one packaged the OnePlus 2. The front of the box is covered with embossed, glossy black text that reads "This is the OnePlus 7T. It's the culmination of all our design and engineering efforts, and crafted for those, who like us, always strive for the very best." The box itself is longer, symbolic of the slightly longer 20:9 aspect ratio of the updated display.
First out of the box is a document pack, complete with warranty information, quick start guide, some OnePlus stickers, a SIM tool, and a letter from OnePlus CEO Pete Lau. The letter thanks the OnePlus community for the pursuit of improvement and welcoming new customers to the community.
Beneath the paper pack is the OnePlus 7T itself, which we received the Glacier Blue finish. Below the phone is an included factory case so you don't have to rock the phone completely naked. Below the case is the latest Warp Charge 30W adapter and cable. Otherwise, the phone doesn't include any earbuds or a 3.5mm headphone adapter - since the phone has no headphone jack.
Next up, let's take a look at the changes that OnePlus made with the 7T's design and we'll quickly compare it to the OnePlus 6T and the OnePlus 7Pro.
https://www.gsmarena.com/
Share 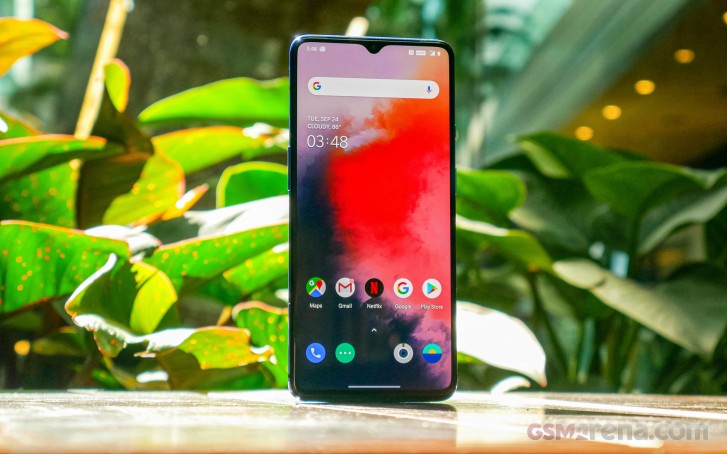