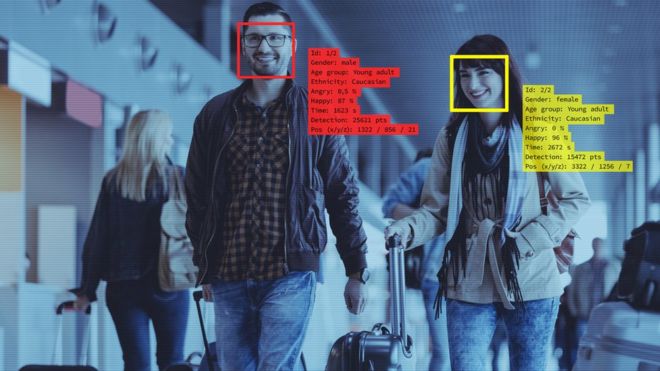 Home Secretary Sajid Javid has given his backing to the police in their trials of facial recognition cameras.
The surveillance software, which is designed to help spot suspects in public spaces, has been trialled by several forces, including the Met.
Civil liberties campaigners have criticised the technology, which is the subject of a legal challenge.
But Mr Javid said it was important that police made use of the latest tools to help them solve crimes.
Shopper challenges facial recognition surveillance
Police 'miss' chances to improve face tech
Police facial recognition cameras have been trialled at events such as football matches, festivals and parades.
High-definition cameras detect faces and compare them with existing police photographs, such as mugshots from previous arrests.
But the technology has been criticised for being too inaccurate, particularly when identifying black and ethnic minority people.
Civil rights campaigners have also criticised the fact there is no specific regulation governing how police use the software or manage the data gathered.
Speaking at the launch of new computer technology aimed at helping police fight against online child abuse, Mr Javid said it was right for forces to "be on top of the latest technology".
"I back the police in looking at technology and trialling it and... different types of facial recognition technology is being trialled especially by the Met at the moment and I think it's right they look at that," he said.
Media captionHow one man was fined £90 after objecting to being filmed by police
The Information Commissioner has previously raised concerns about the technology, saying forces had to demonstrate that it was effective and less intrusive alternatives were not available.
Mr Javid suggested longer term use of the cameras would require legislation.
"If they want to take it further it's also right that they come to government, we look at it carefully and we set out through Parliament how that can work," he said.
Mr Javid's comments were made as police were given a new set of technological tools to help fight against online child abuse.
According to the Home Office, the three new tools will help speed up investigations and limit the number of indecent images of children officers have to view.
The technology, which cost £1.76m, aims to improve the capability of the Child Abuse Image Database, which holds millions of images.
It can take 24 hours for police to search through a computer hard drive to see if it contains indecent images.
Using new technology, which is being rolled out to police across the UK, the analysis will take 30 minutes.
A system is also being made available to reduce the time investigators have to spend assessing the severity of abuse footage.
Mr Javid described the techniques as "game changing", saying they would help bring perpetrators to justice and protect victims.
https://www.bbc.com
Share